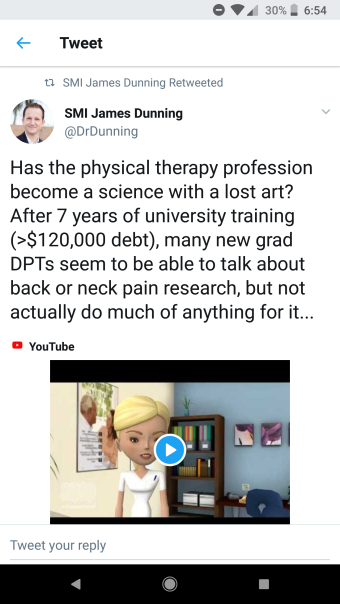 Dr. James Dunning of The Spinal Manipulation Institute, a group that provides continuing education courses on spinal manipulation and dry needling, posted a tweet and a link to a video that have been going around social medial circles in the past few days. Dr. Dunning and others argue that physical therapy practice is, at least in part, an “artistic” endeavor. That is, there is some element of uncertainty that requires creativity or a unique approach with diagnosis, treatment, or patient interaction. In addition, it is suggested that medical science does not truly capture physical therapy as practiced in the clinic. Dr. Dunning and others imply that there is something left behind by the research, limiting its overall utility for practitioners. The satirical video endorsed by Dr. Dunning goes further, and critiques the current state of evidence-based practice. While I will do my best not to fall victim to the trollery, I want to lay out some of the claims made. I am not sure of the origin and intent of the video, but Dr. Dunning seems to take the claims at face value.

The video depicts a patient discussing her neck pain with a therapist that has recently adopted the evidence-based practice philosophy. The video suggests that those who “do evidence-based practice” spend all their time reading research articles, are only allowed to perform treatments that are supported by randomized controlled trials, and bore patients with statistics instead of actually helping them. By Dr. Dunning posting and endorsing this video, it is implied that he thinks that those who believe in evidence-based practice have meaningless debates about science and statistics, are impersonal and cold to patients, and fail to engage in the “art” of physical therapy that supposedly relies on clinical intuition, expertise, and creativity.

Physical therapy practice is not an art, but an applied science that is currently incomplete. It is a dangerous mistake to position ourselves as artists instead of consumers and users of medical science. When physical therapy is said to be an art, the very definition of art is stretched so thin it disintegrates. I have already discussed the difficulties associated with uncertainty in clinical practice, and I acknowledge that for many situations, we do not have all the information we would like to have. This does not mean, however, that physical therapy becomes some magical experience for patient and therapist. The uncertainty we see in physical therapy is not a good reason to believe there is something science cannot understand in principle. And it is certainly not a good reason to perform low value treatments that have their earnest supporters, happy patients, and lukewarm studies like dry needling, instrument-assisted soft tissue mobilization, and kinesiotaping.

It is telling that the degree to which clinical practice is in art also apparently depends on the strength of the evidence for the person’s pet treatment; the less supportive the evidence, the more often we hear that what they do is simply beyond science. By alleging that physical therapy practice is some lost art that is not captured by the current science, they can dismiss studies that are not favorable to their treatments and suggest that they alone have the secret sauce for getting patients better. It is therefore not surprising when Dr. Dunning dismisses evidence-based practice or distorts the concept, when the evidence for needling therapies has been less than robust. If the physical therapy profession has in fact become a science, what about that does Dr. Dunning object to? Dr. Steven Novella puts it thusly:

“What do you think science is? There’s nothing magical about science. It is simply a systematic way for carefully and thoroughly observing nature and using consistent logic to evaluate results. Which part of that exactly do you disagree with? Do you disagree with being thorough? Using careful observation? Being systematic? Or using consistent logic?”

Debating treatment approaches usually doesn’t go anywhere. Just look at anytime someone asks for the best dry needling course on Facebook. When the evidence points in the opposite direction, many just dig in and double down. It is always the same story: we ought not to forget the three pillars of evidence that are constantly misinterpreted, we should ignore the evidence that suggests that anecdotal success is not evidence for effectiveness, and for the newest panacea, there is just something so magical, so metaphysical, that science can’t possibly understand it. These are just tactics from defenders of treatments that lack sufficient evidence, in order to avoid cognitive dissonance and not have to think critically about what they do and why they do it.

In embracing evidence-based practice and science more broadly, there is nothing lost. We are just as compassionate, just as caring, and just as effective therapists. We just wish to make sure we are not fooling ourselves or our patients by ignoring research or misinterpreting the role of science. There are no evidence-based practitioners that treat like the one in the video, and it is clearly a mischaracterization of what we do. For the future of our profession, we need to embrace evidence-based practice and stop looking at ourselves as artists and more as consumers and users of science. Anything less will edge us closer to the epistemological black hole of alternative medicine and pseudoscience.